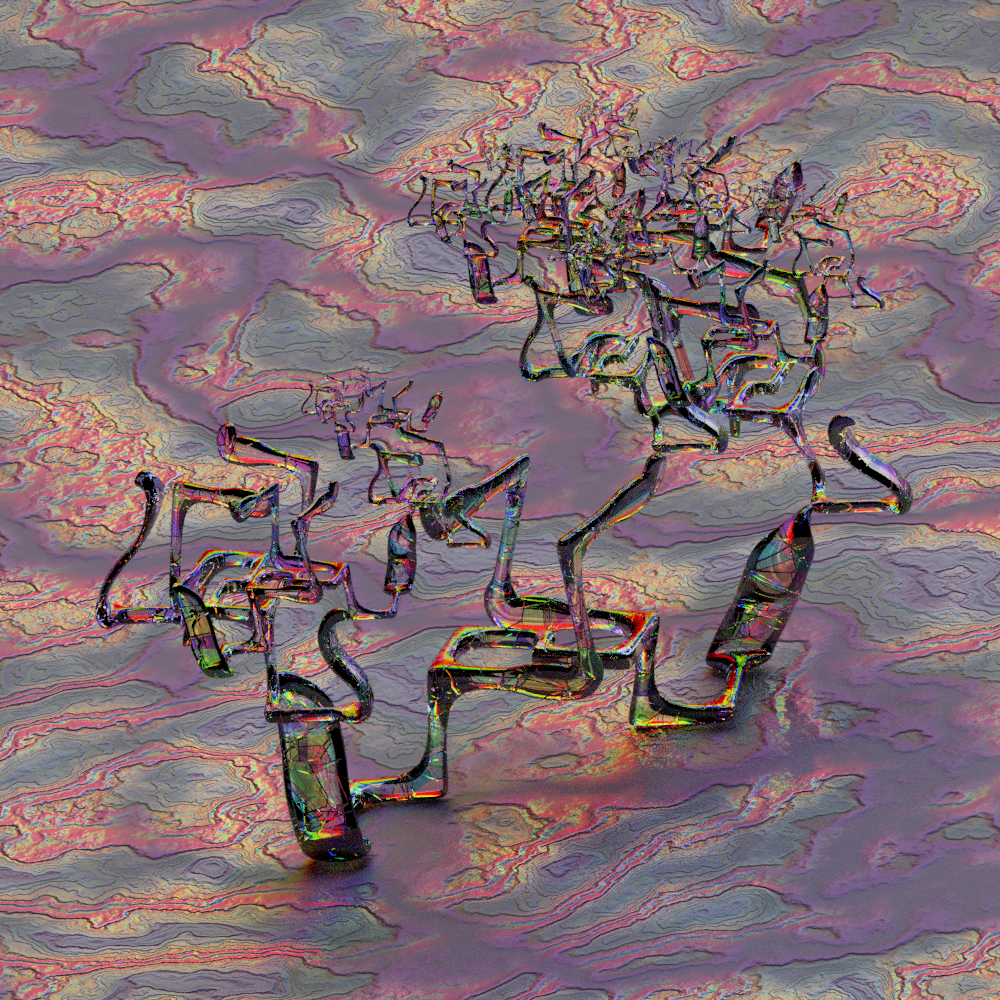 The scape is a text, a door and an environment. A droning sound that could be of vocal origin fills the space and on closer inspection, smaller chattering sounds can be heard. A disembodied, resynthesized voice is present and periodically verbalizes the text. You discover that you possess one axis of mobility. As you rotate the voice is spatialize around you and the symbols bend oddly into three dimensional space. Accidentally, you send an impulse to the text and everything disappears.

A blue spiral hall appears before you, now shifting down the light spectrum to green, then red, eventually circling back to blue. Like the light and the form of the tunnel, the sounds around you are also changing in a sinusoidal pattern. Pointillistic, harmonically related tones appear and vanish around you, slowly at first but then increasing in frequency until they become a delirious blur of noise, like a drip becoming a waterfall. Again you discover that you have one axis of mobility, this time front to back. You begin moving forward down the spiral hall and soon realize that you are approaching its end. As you move closer to the end of the hall, chaotic bursts of sound begin to rise up in front of you. You move through the color shifting, surface at the end of the tunnel. 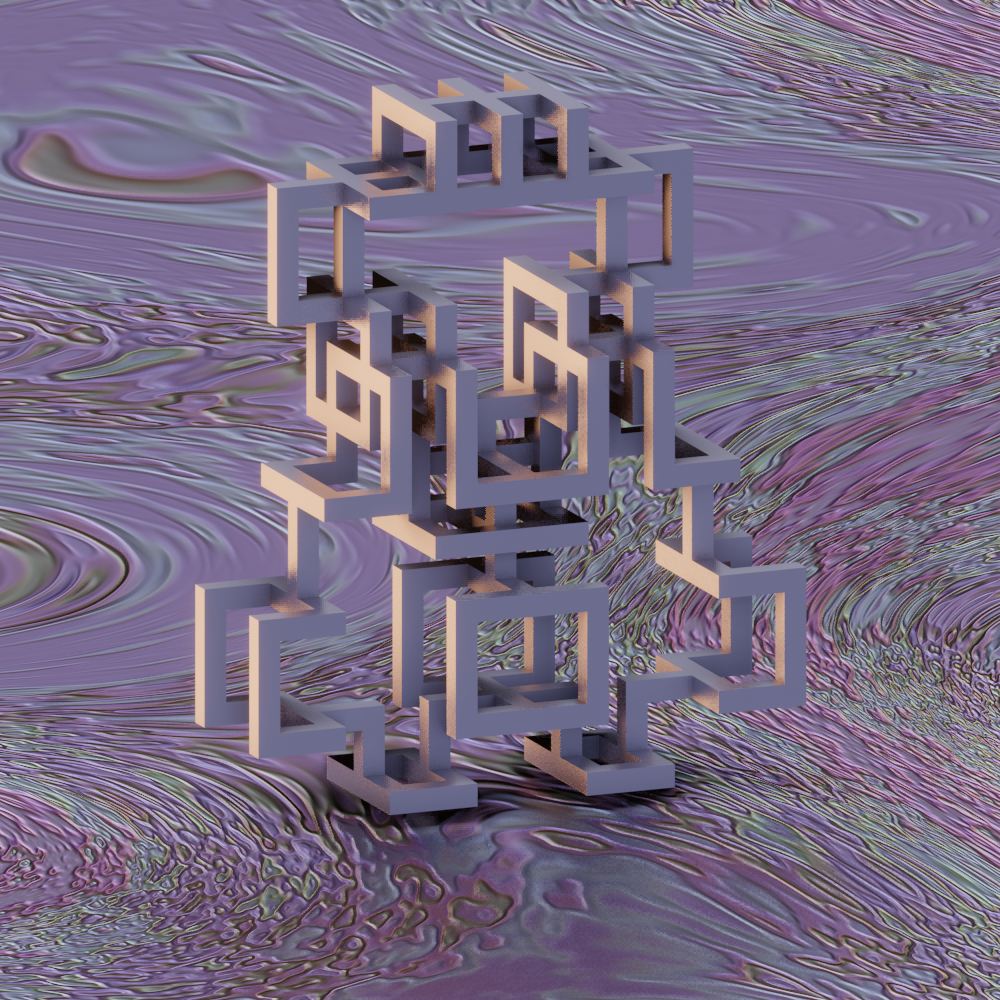 Still caught in the forward momentum of your passage through the tunnel you find yourself hovering above a new scape. Here you see mathematical, yet arbitrary objects arrayed out on glowing red planes. Below, a procedural ocean or lake slowly churns and you can hear its oddly restructured waves lapping against an invisible shore. Testing your mobility in this space you discover that you now possess 2 axis of movement, always circling around the center of the array but never moving closer or further from the center. As you move, resynthesized nonverbal utterances emerge in your ears, out of space as if they are playing directly in your mind. 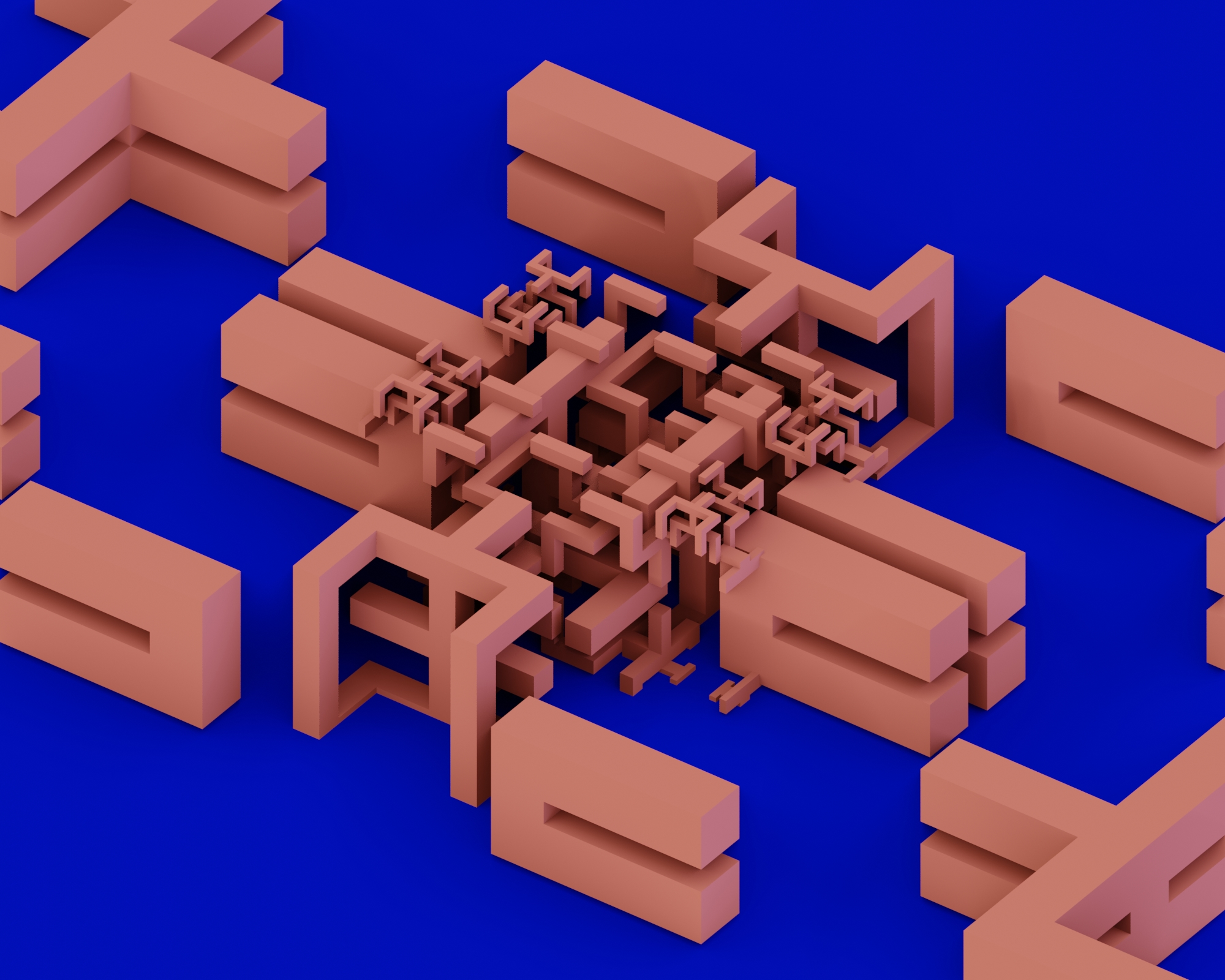 Circling around this array, the ocean and your vantage point change. You find that you are controlling the position of a symbol, which now hovers in front of you- a black and green beam with a 90 degree bend. Experimentally, you hover the symbol over one of the mathematical structures arrayed before you and find that you can send an impulse to it. The structure becomes suddenly activated, and now it is growing, spinning and emanating a procedural sound which is somehow linked to its motion. Its equally procedural color patterning undulates as it swells until it abruptly shrinks back down as the sound sucks back into itself. Pivoting, you find you can send impulses to various structures in rapid succession, so that their enveloped activations mix with one another inside this synthesized space. 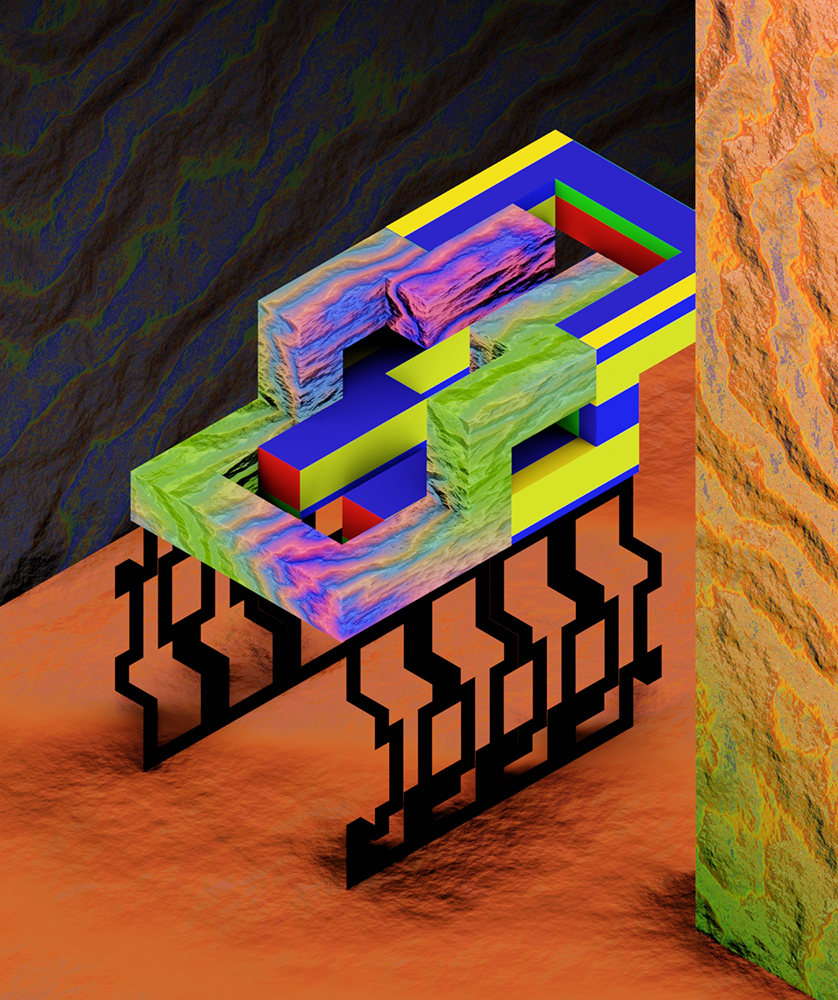 After another impulse, you find yourself in a second tunnel, which rotates vertiginously. Pitched down ultrasonic forms groan around you, intensifying the woozy spinning sensation given off by this tunnel. You move forward and space time seems to stretch. An exponential squishing sound flies towards you as you suddenly find yourself at the end of the tunnel. Again, it vanishes. 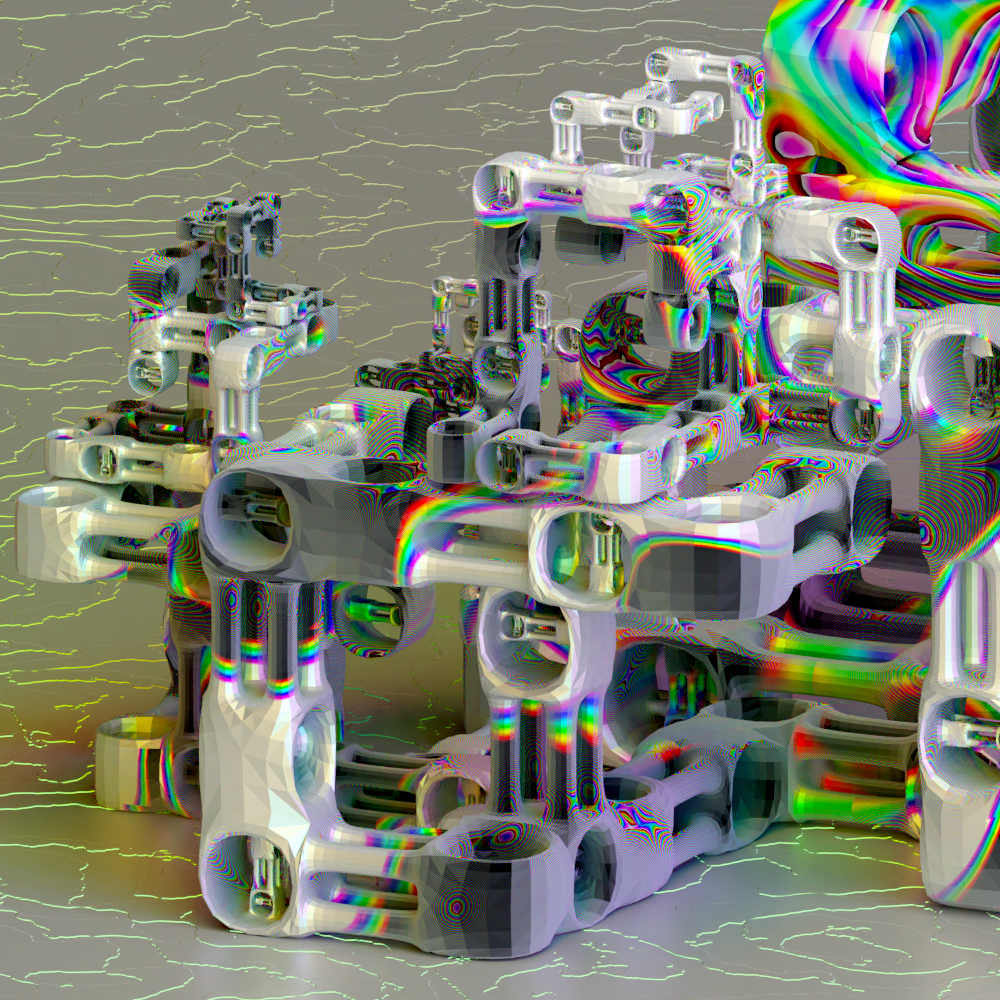 You are now standing in what appears to be an architectural space with conventional physics and gravity. Directly in front of you is a conglomerate structure made up of seemingly separate procedural forms. One of the smaller forms is ejected out from what could be its front- it emits a humming sound as it begins to move along the floor, passing by you with no effect and busily circling the space. As you continue watching, you see that in the top area of the figure, smaller geometric components seem to be reconfiguring themselves, making slurping, whirring sounds. You turn to follow in the direction that the small figure took, which leads through one of the semi-translucent walls that seem to compartmentalize this scape. 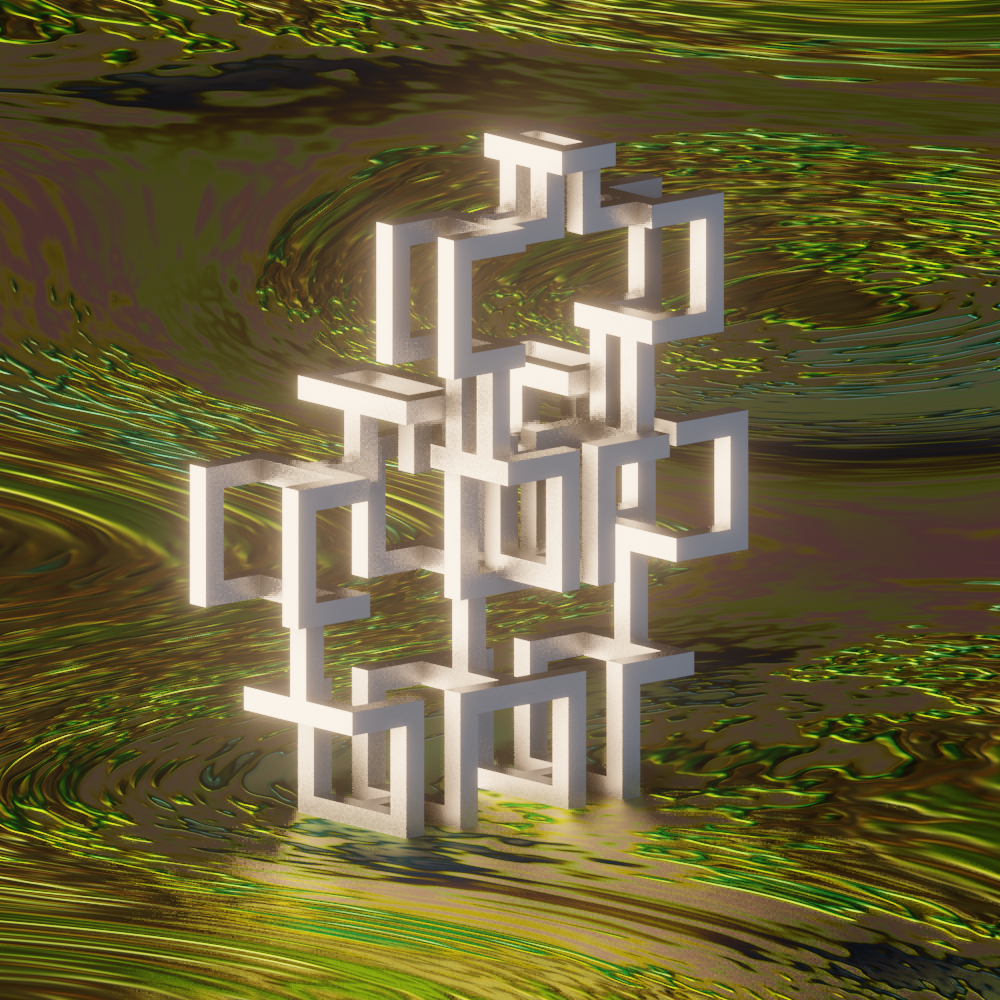 As you enter the new compartment, you notice that the environmental sounds which somehow failed to register before have shifted to a new pattern. The sound calls to mind gently breaking glass in high temporal resolution. In front of you sits another composite structure, different in form from the previous one. This one contains nested pearlescent figures that seem to suggest a vaguely biomorphic shape. These forms are fenced in on three sides by an impossibly thin iridescent lattice. Small glowing cubes seem to be sliding along this lattice, their movements giving off a sound of glass frozen in time that is now being bent. As you move toward the nesting biomorphic forms, the smaller one breaks off and begins moving towards you, passing directly through where your body would be located. It produces a gurgled cry that seems to come from synthetic vocal chords. 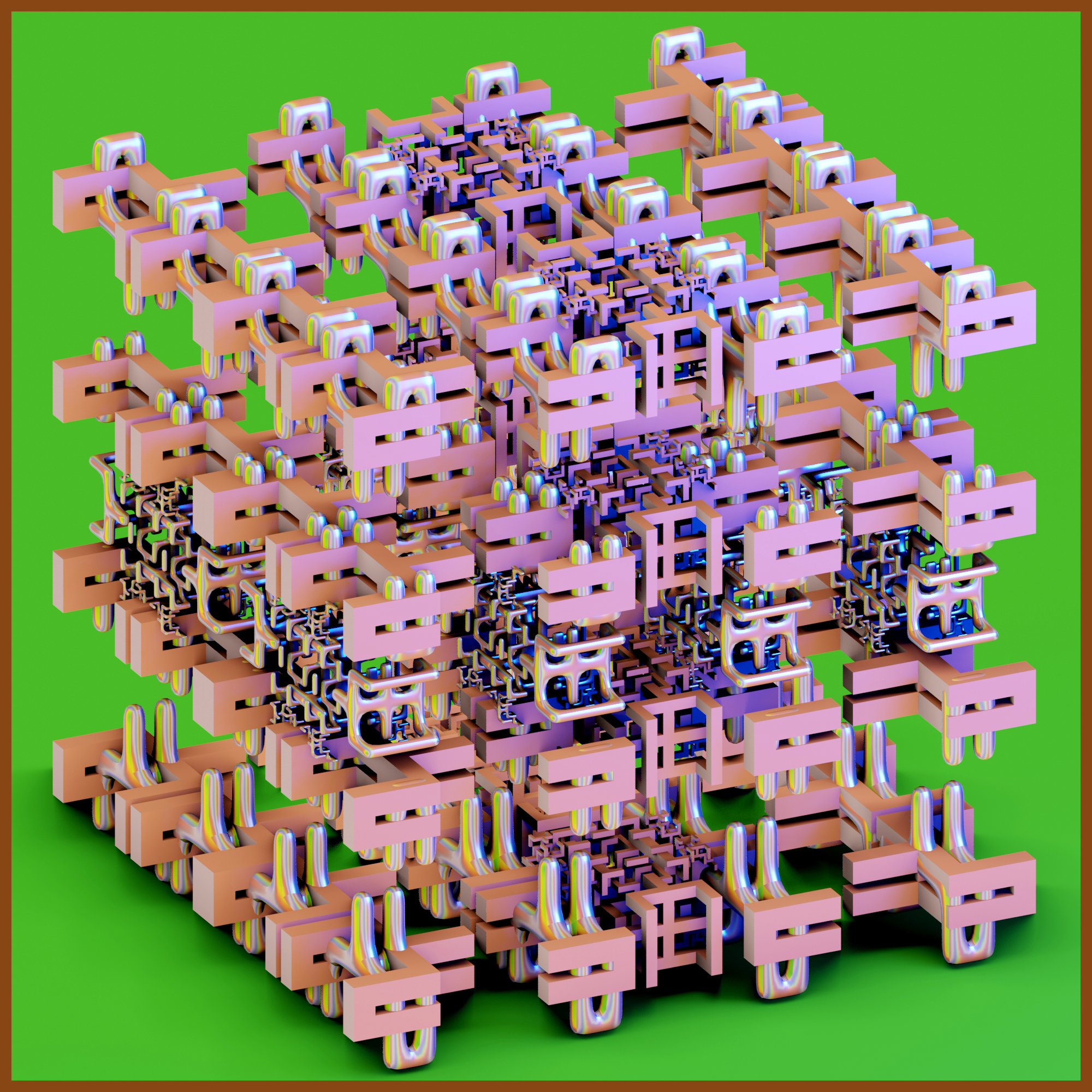 Moving through the scape reveals each cubicle to contain variations on the themes of conglomerate procedural structures, reconfiguration, and sections that break off and migrate around the space. Bending, shattering time-frozen glass crackles and warps throughout, mixing with the whirring machine-animal noises of the migrating objects and the pseudo-liquid sounds of the reconfigurations. You step back from the cubicles, out into a slowly shifting bluish plain and can see the mechanical operations of the inhabitants unfolding silently through the modulated refraction of the cubicle walls. 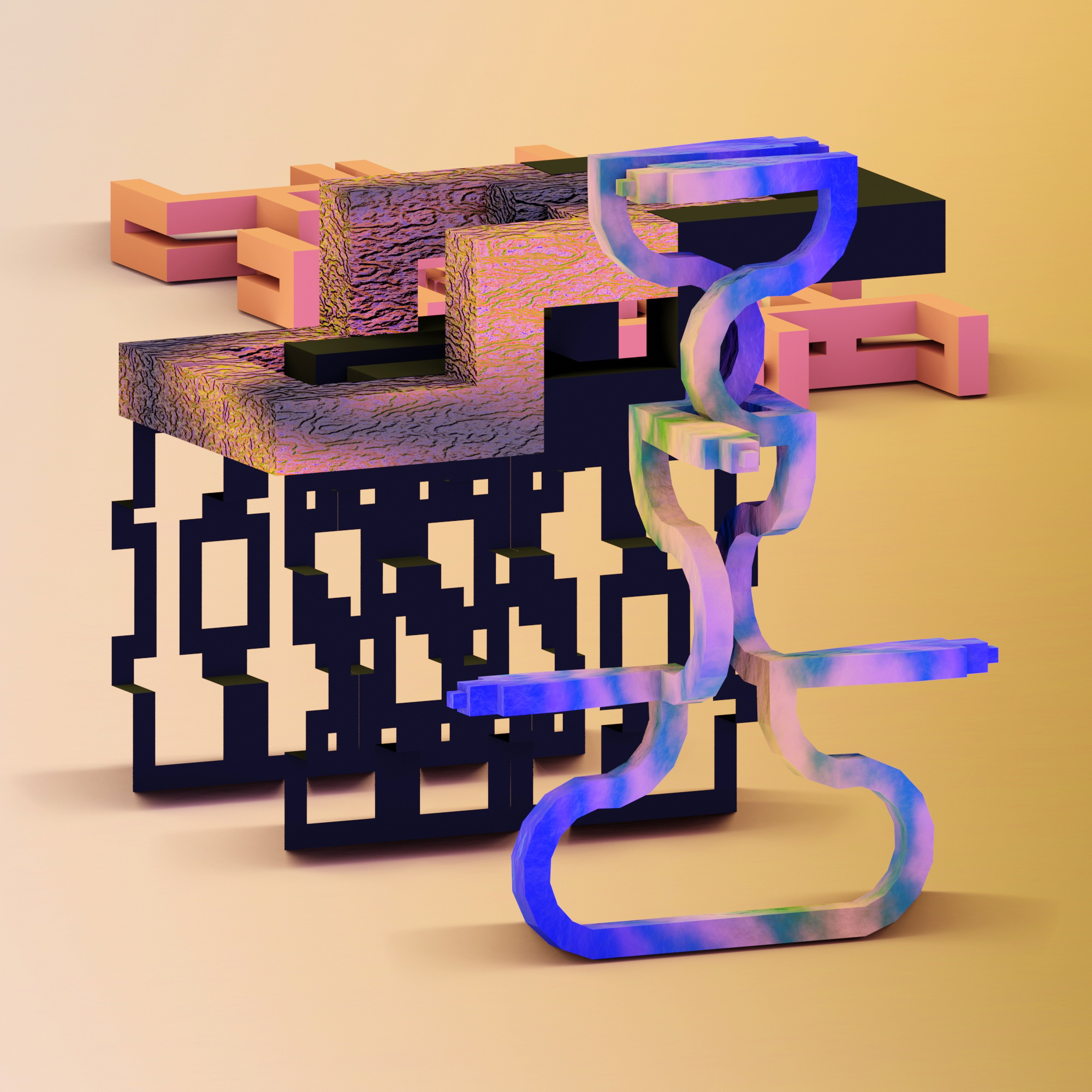 An impulse breaks you out of your spell- again everything vanishes and you appear in a third tunnel, the cube-formed geometries of its walls glowing with procedural noise. A resonant, familiar clicking sound rises around you, calling out to be named, but when you search your mind for what it might be you cannot. You move down your one axis of mobility and the tunnel walls race by. At the end of the tunnel you are again confronted by bursts of sound, which suddenly end as the tunnel freezes momentarily. 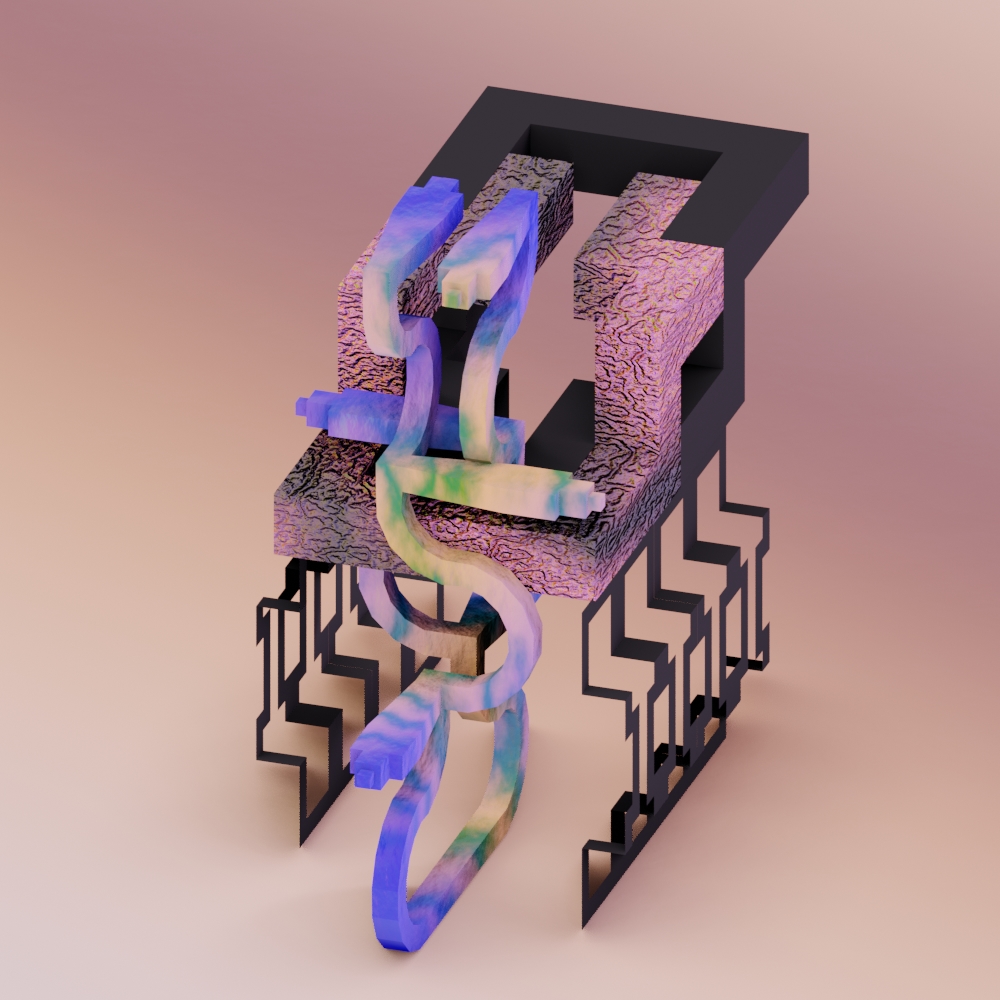 A new scape has taken form around you. You are suspended, motionless in a black void, hearing only a nearly imperceptible low rumble and crackling from all directions. You try to move and discover that you are able to move through the space in any direction as your sense of vertical orientation begins to fade. A vast cubic array of luminant lines surrounds you. Along these lines, glowing, recursive cube forms move in regular motion along the arrays exterior lines. As you move towards one of these lines you hear hollow, unstable pitches radiating out from their core. 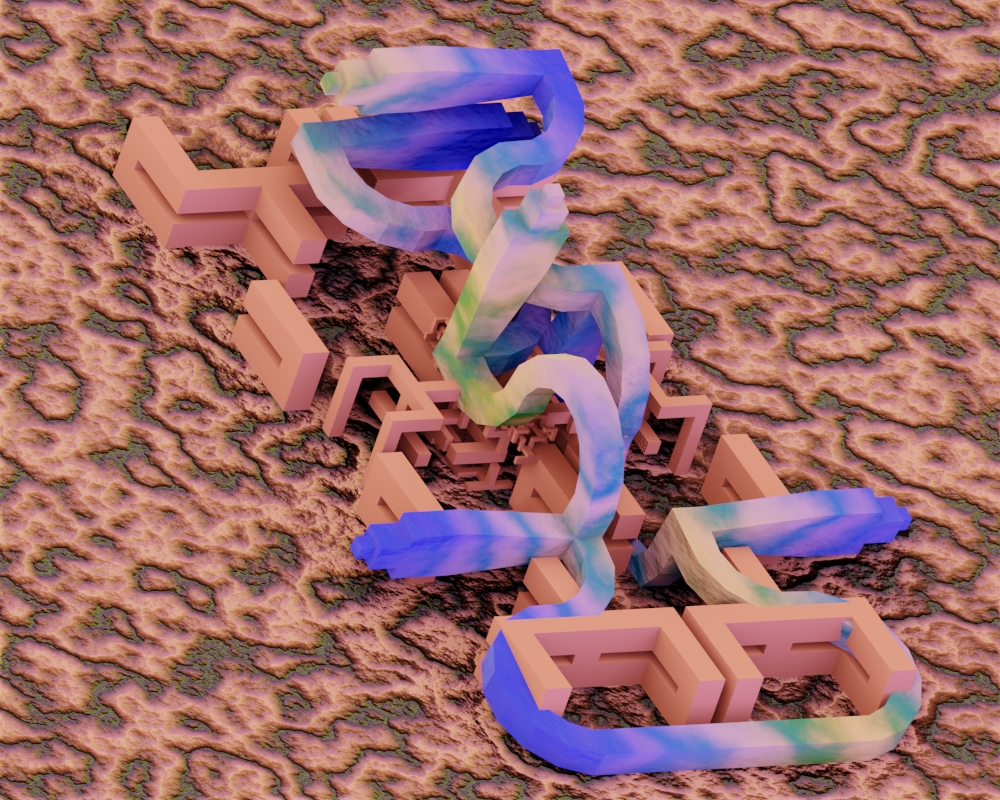 Following along the glowing exterior line you move towards a cube in the corner of the array. Its surface reflects some unseen light source which shimmers as you move around it. You move closer, finally coming up to its outer wall- suddenly as you pass through its surface, the cube erupts out around you with a burst of noise, multiplying in size to nearly the size of the array. The procedural, undulating surface pattern surrounds you now and begins swirling in all directions. A sound reminiscent of the resonant clicking from the previous tunnel fills the inflated cube, shifting as you move around inside of it. Another cube announces that you have unknowingly touched itâ€™s surface, exploding out from dormancy to surround you in another swirling texture. 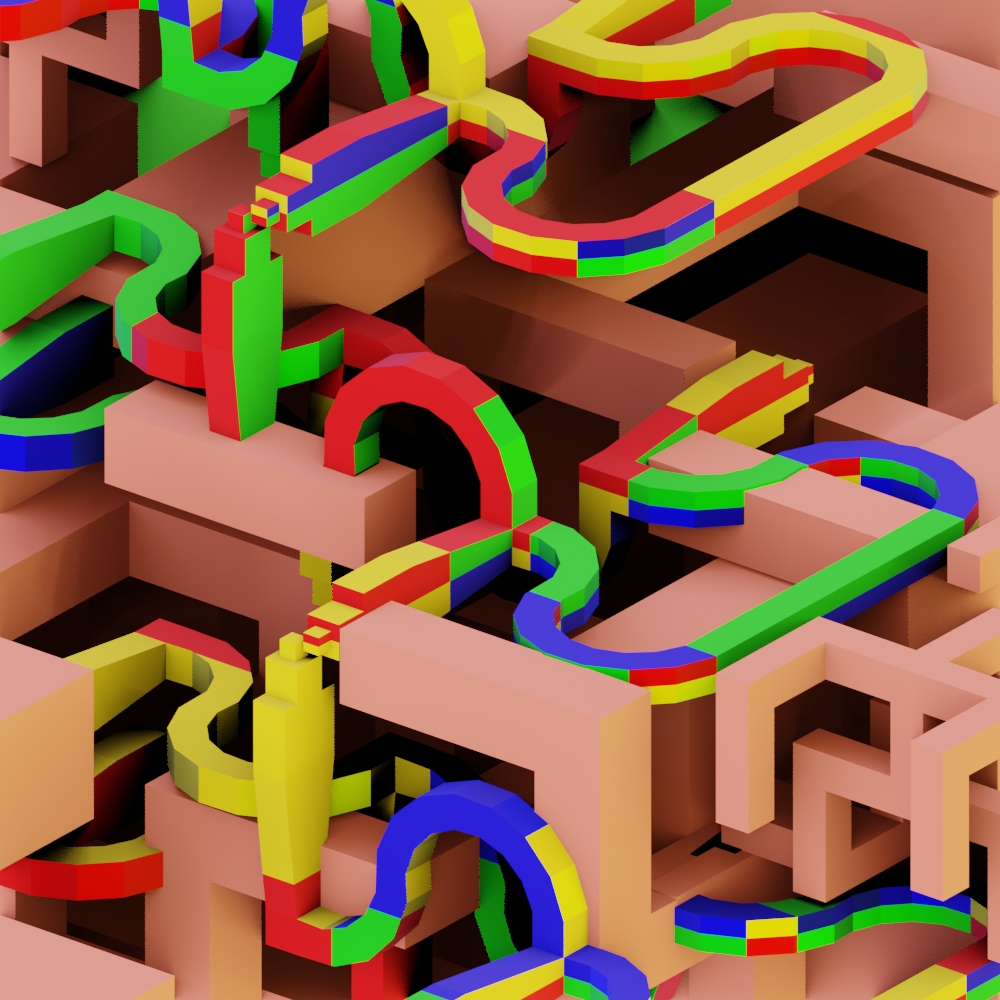 You find that the two expanded cubes overlap imperfectly, and that you can see each of their surface patterns though the others transparency pattern. The second cube flickers red, blue, green and pink making a sound like freezing water in a different time scale. Circling around the array, you cause the remaining two cubes to erupt around you, just as the first cube retracts, collapsing back into stillness. The new micro environments fill your ears with sounds of water, somehow at varying points between ice and liquid, mangled in time. Spinning and overlapped procedural noise revolves around you until all of the cubes retract back to their corners. 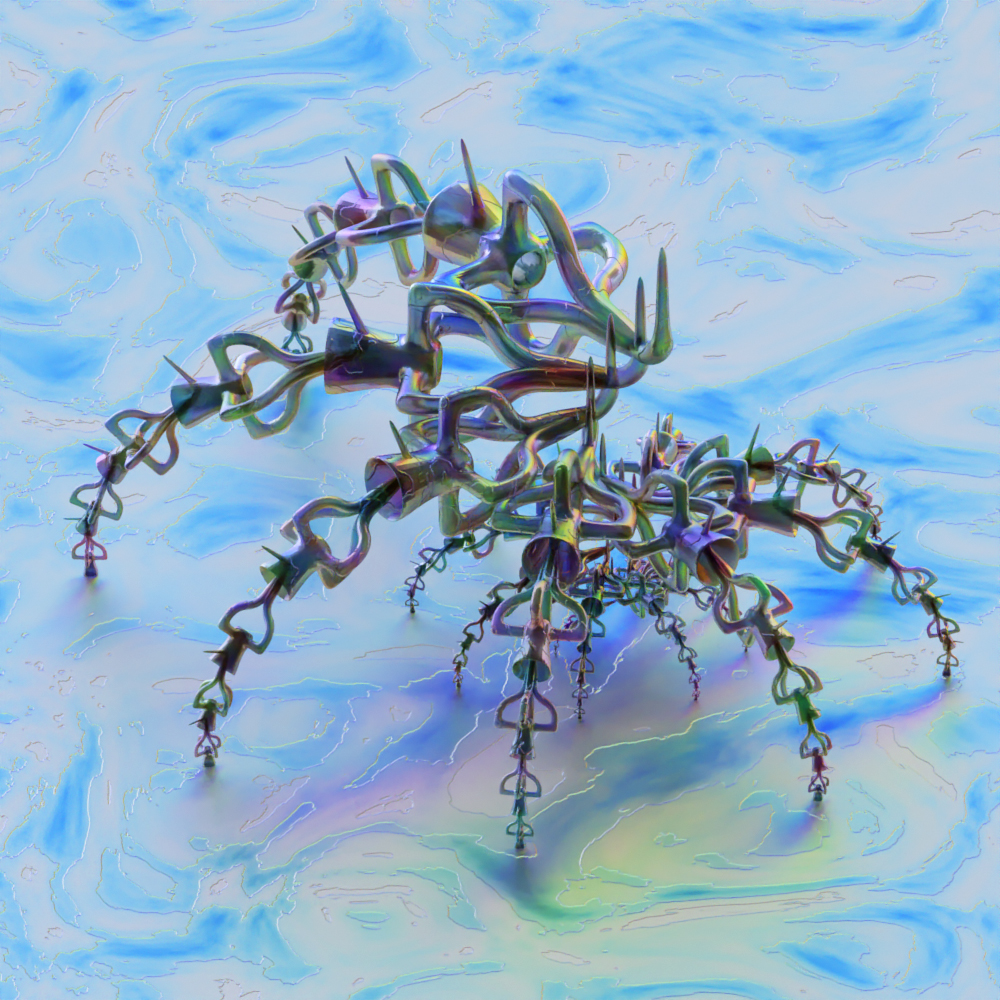 As the final cube retracts, it sounds like an absence in the void around you. You float along the glowing array, splashing through the erupting cubes, until almost by accident you send out an impulse and the space freezes and disappears. You find yourself again at the portal made of words being spoken by a disembodied voice, with one axis of rotation. 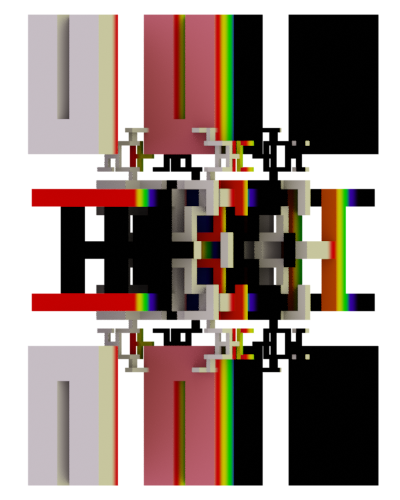